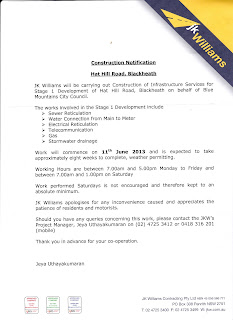 It appears elected representatives have let the people of Blackheath and the rest of the Mountains down once more. About to spend money they don’t have to pay for something they can’t afford and to make a return that won’t even cover the costs of general maintenance for the new residential and surrounding area. All based on a lack of important reports (Fire, Soil, and Water Supply) and an environmental report that has corruption written on every page.
Now they and us will become victims of there own doing. The state government will be taking LEP’s out of their hands because of incompetence and the ridicules time it takes them process building applications. (Except this development which only took the council a week to approve!)
God only knows what this development will end up looking like now, perhaps it will be surrounded by colour bond fences and look a bit like Penrith or Seiberi Close! Perhaps the state government has already been controlling the council for a long time as a large portion of them are Liberal/Labour and they are just puppets of their parties.


This development only shows that the Councillors and the Managers of Blue Mountains City Council are either incompetent or corrupt and do not represent the people they put them there.

Links to our other sites